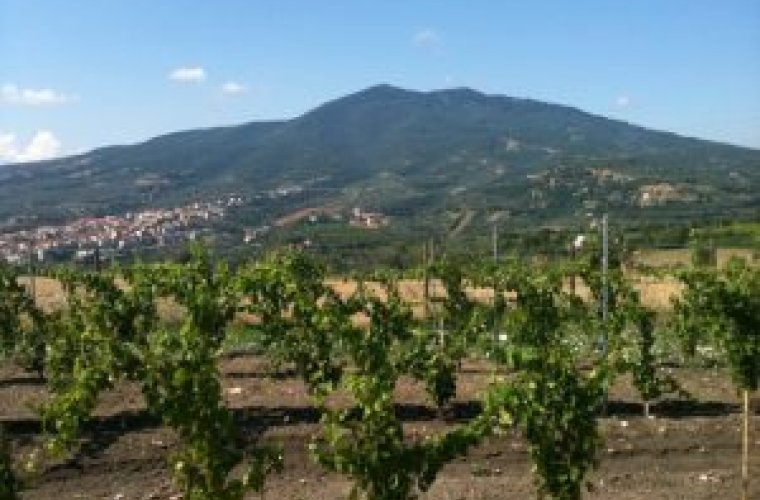 Barile is in the heart of the Vulture, that fantastic wine-growing area that extends around the volcano that died more or less 30,000 years ago, north of Basilicata (on the border between this one, Puglia and Irpinia).

The town - with a strongly evocative name for those who deal with wine - was built on the back of two hills, furrowed by three small rivers, attached on the eastern side to the foothills of the volcano, about 600 meters high.

Barile, together with Maschito and Ginestra, is one of the three centers founded by the Albanian refugees fleeing from Scutari in front of the Ottoman advance in the XV century. The etymology, the folklore, the blood survive from that culture and, more than anything, the dozens of Scescio cellars dug like an anthill on the northern side of one of the two hills of Barile: a still fascinating, dreamlike, evocative setting , magnificently immortalized in 1964 by Pier Paolo Pasolini who shot some incredible scenes of his beautiful (and unmissable) film The Gospel according to Matthew.

These are caves dug into the tufa that were used as first dwellings by the newly arrived Albanians and which, subsequently, were used by the local population as cellars. Although in the South there are numerous examples of cellars dug near the inhabited centers, in the Scesciosiamo certainly facing the most significant and spectacular case: even today, after five centuries, 128 cellars were recorded, all private, which now you can visit with comfort thanks to a beautiful walk set up by the Municipality of Barile, which has enhanced the Scescio through an intelligent architectural recovery in good balance with the surrounding environment.

The term Scescio derives from the phonetic Italianization of the Albanian term Schesce, which means "piazza", "agora", attributed because in this place all the activities of the immigrant community from the Balkans were carried out.

With the passing of the decades, and the construction of real houses, the caves have been adapted to the preservation of Aglianico, olive oil and cheese, thanks to the perfect temperature and ideal humidity, constant in the seasons of the year. .

In the last twenty years there has been a reversal of the trend towards abandonment and degradation, which has hit this area, started in the post-war period; some locals have also been acquired by a couple of wineries and have been brought back to new splendor. Even today the view of the Scescio is one of the greatest satisfactions given by the Basilicata of the Castles of Frederick II, without obviously taking anything away from the universal beauty of Matera and the uncontaminated environment of this beautiful region. The Scescio is one of the few examples of rural archeology that has survived the destruction of the past and the diabolical oppressive aesthetics of modern industrial processes: it is a perfect "living" museum of the historical memory of the southern Italian countryside.

Around the Scescio we find today in the Vulture a myriad of "modern" cellars that have been able to enhance the great local vine, the aglianico: the overall management of the wine-growing activity is not yet sufficiently positive as these talented winemakers deserve - on one side historical lack of perception, outside the Lucanian walls, of the great goodness of these wines; on the other hand, there is little prudent management of the grapes produced by the many farmers who historically have never played the role of winemakers - but the work of the most is being imposed with strength and satisfaction on the Italian and world market.

Thanks to these companies we are now able to report many good labels of Aglianico del Vulture coming from these lands, which for convenience we divide into two large groups: daily wines - cheaper and perfectly suited to the consumption of every day at the table - and wines more important, to be destined for some more meaningful occasion (without however exceeding the search for the exceptional nature of the moment in which to open them ... ).

Among the daily wines - which you can find at a maximum price in a wine shop of 10 euros - we will definitely mention the Aglianico del Vulture S'adatt 2013 by Michele Laluce (Ginestra), vinified in steel, veined by a good fruity pulp and a corroborating acidity ........